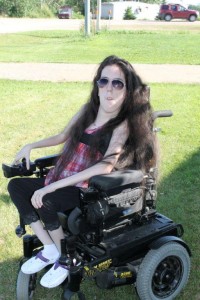 My niece, Melissa Klassen, is a remarkable young woman. I admire her for many reasons, but the latest reason is her fight to have female playable characters included in the new Aliens video game. I’m not a gamer, so I asked Melissa to explain.

How did this campaign of yours start?

It started when I was little actually! Growing up we watched all these cool action movies and the ALIEN movies were also included. Same with gaming. I started gaming at a really young age. I am close in age to my brothers, so we did everything together. We used to take turns playing games, and argue over who got to play next!.

Gaming has always been important to me, it meant family time and it was also an escape from my daily struggles with being physically disabled. It took a long time to get “good”, because I had a hard time holding the controls, but with help from the boys, I finally mastered it!

Fast forward about 20 years to the end of May 2012. I was eagerly anticipating the long awaited game “Aliens: Colonial Marines” which is the canonical sequel to James Camerons 1986 blockbuster film ALIENS, although it actually takes place after David Fincher’s Alien 3 from 1993. After watching a video interview with the game’s producer Brian Burleson, he had stated when a fan asked if we could play as a female, that there were females in the game, but they were not playable. This was very disappointing news to me and many other fans of the films, as the franchise revolves around strong women, like the main character of the films “Ellen Ripley”, played by Sigourney Weaver.

Even the aliens themselves are designed with the female body in mind. In ALIENS, the military of the future, which the movie is based on, the “United States Colonial Marines” is a unisex fighting force. In James Cameron’s vision, there is no gender bias. Even the book Starship Troopers (which the cast all had to read prior to filming) suggests that females make better pilots due to their faster reaction times.

I had never done any petitions before, but I figured, if I am this disappointed by this, surely there are others!. So I started the online petition with the first initial goal of 100 signatures, thinking I would be VERY lucky to reach that. I posted it on a few message boards for the game, and it took off from there. Pretty soon I was at 1000 signatures!

What kind of support did you get?

I got lots of support from fellow fans of the franchise, and gaming. Once we hit 1000 signatures we all decided to go bigger, so I emailed several gaming websites. The next morning it was literally all over the internet, with my name haha!. From that day we gained triple the amount of signatures in about 10 days, so we were up near 3000. I made sure I emailed every website and magazine and TV show that covered us and thanked them for their support. The developer Gearbox Software and the Publisher SEGA had yet to respond, so I decided to push a little further by approaching the cast. I had lots of help from the “Aliens Legacy” website in finding the appropriate contact information for the cast and I took it from there.

I really didn’t think I would get any responses, due to the fact that I had to go through their agents. The first one to respond was Ms. Cynthia Scott, Who played Corporal Cynthia Dietrich, the Medic. She was very polite! She pretty much paraphrased James Cameron, talked about his vision of “a unisex fighting force” and agreed on all points we made in our petition. She even offered further help by extending an “if you need anything”, which was great!

We also got support from Colette Hiller (Corporal Colette Ferro, the cool Dropship Pilot), William Hope (Lieutenant Gorman, the rookie Lt.), Trevor Steedman (Private Trevor Weirzbowski), Ricco Ross (Private Ricco Frost) and Jenette Goldstein (Private Jenette Vasquez), Daniel Kash (Spunkmeyer, the Dropship Co-Pilot) and Lance Henriksen’s (Bishop, the “Artificial Person”) facebook page also shared our petition. My initial goal was to get all the female marines support, I never dreamed I would get all the female Marines PLUS most of the men!

With our newfound star power there was another surge in signatures and we really had some more muscle behind us!

Here’s an example of the support she received:

Why was it important to you to have playable female characters in this game?

Well Gearbox and SEGA are always talking about how their game is a “true sequel” to the film, and one of their main taglines for the Multiplayer is “Become a Colonial Marine!”. Many people have actually asked that question, and have said “What does it matter? you never see your character!” (The game is played from a First Person perspective). I think in order to “Become a Colonial Marine”, you need to identify with your character. In the game it is said that you will level up your character and be able to customize your appearance, making the character YOU. It is pretty hard for female players to relate to a male character in that way. I also felt that the female marines needed to be present in the Multiplayer, which holds the lasting appeal.

Another factor was that for female gamers, almost all Shooter games are geared towards men, where as casual games are geared towards women, like party games and dance games. But there are many of us that like to play shooters and for me personally, I sometimes feel like women are just eye candy for the men, or the “damsel in distress” and the root of revenge.

I felt that if there was one game to change this, ALIENS was the perfect one!

Any news to report?

Yes! On Sunday Gearbox finally broke their silence at their panel PAX Prime. They announced that there will be playable female characters in both competitive and co-op multiplayer!. Whether they were working on them all along like they said on Sunday, or the petition with nearly 4000 signatures secured them, we will never know for sure! But all that matters is they are in!

I am always impressed by people who see something they don’t like – AND DO SOMETHING ABOUT IT! Congratulations Melissa! You are an inspiration.

What I’m Listening To – The Tea Rose (Jennifer Donnelly)