Yay! It’s warmed up some! High of minus thirteen expected today. Plus I had a delicious omelette for breakfast, in case you were interested. 🙂

Stopped on our way to St. George’s Hill so I could get a picture of the amazing sunrise through the trees. 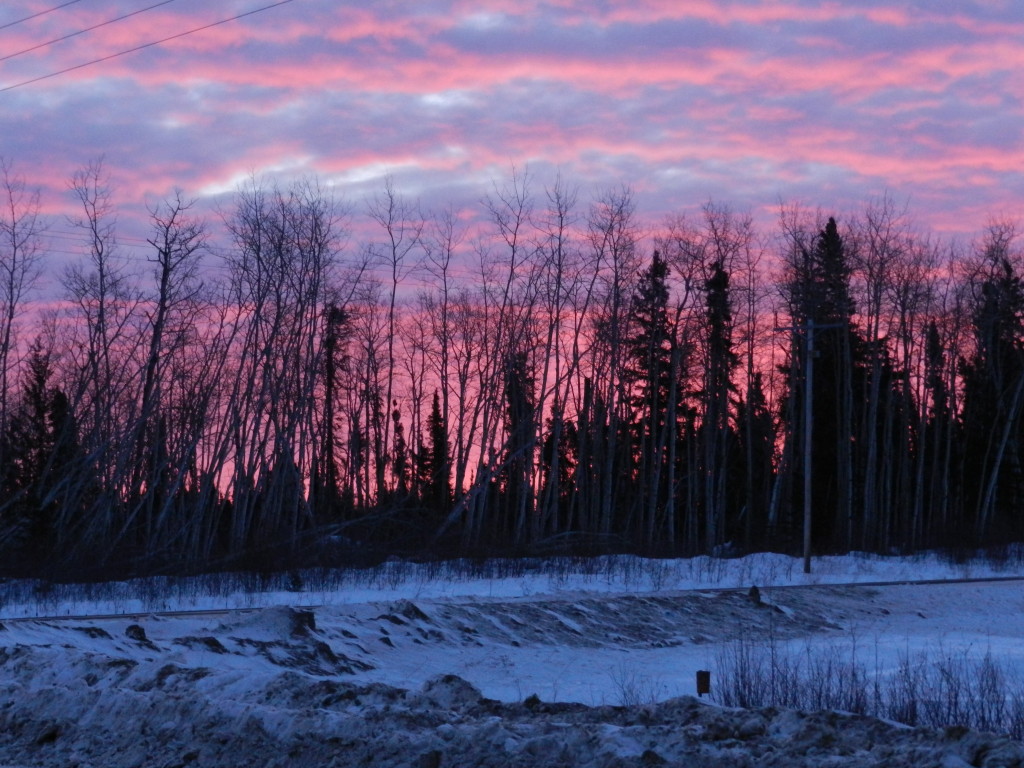 St. George’s Hill is another small community (population about 100) that is directly west of Buffalo Narrows, but 70 km by road. The school usually has about 30 kids (Pre-K to Grade 9) but almost half of them were away sick. Since there were so many away, the Grade One students from Dillon were going to catch a bus and join us, but a mix-up with the bus meant they weren’t able to make it. A really nice group of kids and a first-year teacher who seemed to have everything under control.

There was one girl who sat right at the front who had a speech impediment due to a cleft palate. She asked me a question but I didn’t catch what she said, and when I asked who to repeat her question because I hadn’t heard it she looked a bit disappointed but just said “nothing.” I felt bad. Later she tried again, but another girl who was trying to be helpful wanted her to repeat it to her and she would say it. But again, she clammed up and said “nothing.” I felt worse. I got one final chance, when we were heating up our lunch (Harriet’s homemade soup – yum!) in the kitchen. The little girl approached me and I knew this was my last chance – and I got it. “I’m staying for lunch.” “You’re staying for lunch?” I repeated and she beamed and nodded. “So am I!” What a brave little girl to give me so many chances. I’m glad I didn’t blow it.

Then we were off to Dillon, which is only about 10 km north of St. George’s Hill. There are about 800 people in Dillon, and the school is large and K-12. (Sorry, I didn’t get how big the school population is.)

The presentation in Dillon did not go well. First of all, I broke one of my own rules and exceeded the 60 kid limit I usually stick to. I felt bad that the Grade Ones had missed the presentation at St. George’s Hill because of a bus issue, so I agreed to have them join the group. This made the group 77 kids from Grade One to Six. My mistake.

My they were a chatty bunch – and don’t mean just the kids. It’s tough enough sometimes to keep kids’ attentions without the adults having conversations with the kids or with each other while I’m trying to talk. 🙁 I had to stop a few times and wait for quiet. About halfway through, when the Grade Sixes had basically turned their backs to me and had their own little circle at the back, I said that obviously they were not interested in what I had to say so they might as well leave. And they did. Not that it made any difference. So I shortened things up, left out lots of details I normally would have included and wrapped it up. A very disappointing afternoon.

Went for a long walk when we got back to the motel to de-stress. That was relaxing. Took a picture of the Narrows and one of the town sign as well. 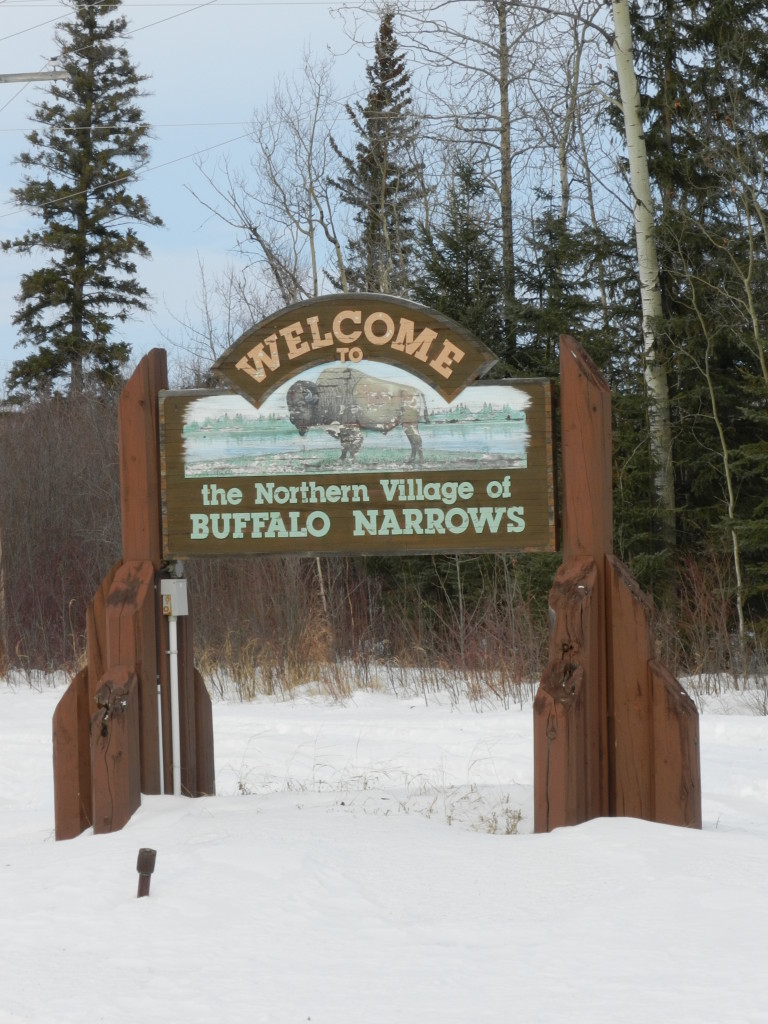 Tonight’s our last night in Buffalo Narrows. Tomorrow we visit Canoe Lake and Cole Bay and move to the Sandy Beach Resort by Beauval where we’ll be for two nights.