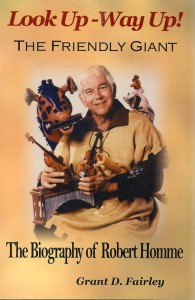 A couple of weeks ago I found out that someone (Grant Fairley) had written a biography of The Friendly Giant! I had to get it. So I ordered it from Palantir Publishing and it arrived today!

Friendly (aka Bob Homme) has a very special place in my heart.

For starters, I loved watching The Friendly Giant when I was a kid. I’m sure part of my love of books came from all the books he read to me.

So when I was turning 40, I decided to mark the milestone by writing to someone who had an influence on me and thanking them. I chose The Friendly Giant. I had two children’s books published at that time, so I decided to send a copy of each to him along with a letter and a children’s book that he had written that I’d found in a second-hand store – The Friendly Giant’s Book of Fire Engines – which I asked if he would mind signing and sending back to me in the self-addressed stamped envelope that I also included.

In the letter I told him how much his show had meant to me as a kid, and how much I thought it contributed to my love of books. I thanked him for that. I said that I was saddened when his show was cancelled, because my children missed out on it. I told him that I had sent him my books as a thank you, and mused how awesome it would have been for me if my books could have been read by The Friendly Giant.

I didn’t know what to expect. I figured if I never heard back from him that at least I felt I had done the right thing by thanking him.

And then a package arrived in the mail. We don’t have door-to-door mail delivery, but a post office. I gave the postal clerk my package notice card and she returned from the back with a large brown envelope. My return envelope! And the return address sticker read “From the Castle of The Friendly Giant”. I ripped it open then and there. Inside was the book I had sent him to sign as well as another book he had written – The Friendly Giant’s Birthday – both signed “To Dianne, from Friendly”! I was soooo excited! But there was more…

There was also a cassette tape. I raced out to the car and plugged it in (yes, I’m old, my car had a cassette player in it). This is the first thing I heard: The Friendly Giant – 02. Hello (I hope this works – I’ve never posted audio clips before.)

I had tears in my eyes. The Friendly Giant just said my name! And he liked my books! I was in heaven.

And then he did something really really incredibly awesome. He read my books aloud! Just to hear him introduce a book of mine, just as he did with all those other books I’d heard him read: The Friendly Giant – 04. Title 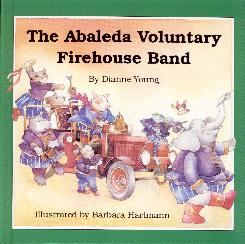 Now I was out and out crying. What a wonderful, kind, giant of a man! I can’t share Purple Hair? I Don’t Care  with you because of copyright issues, but because The Abaleda Voluntary Firehouse Band is out of print, I can share that one: The Friendly Giant – 06. Abaleda

Then (and I still get tears in my eyes hearing this) here’s how he ended the tape: The Friendly Giant – 08. Goodbye

I sobbed. It took me 10 minutes to get my act together enough to drive to work! Then I took the tape in and played it for my co-workers and cried some more!

So now you can see why I was so excited to discover his biography. The Friendly Giant (aka Bob Homme) died in 2000 at the age of 81.

Do you have fond memories of The Friendly Giant? I’d love to hear them. And here’s an idea…

I think The Friendly Giant deserves to be on Canada’s Walk of Fame. If you agree, please nominate him here.

And pass the word around! Thanks.